Tufts University confirmed my hypothesis that vitamin A protects against vitamin D's induction of renal calcification (kidney stones) by normalizing the production of vitamin K-dependent proteins in December, 2008, without citing my hypothesis or telling me they had confirmed it. I am, of course, very grateful that they thought it significant enough to investigate.
I first wrote about vitamin D's ability to protect against vitamin A toxicity in my article “Does Vitamin A Cause Osteoporosis?,” published in the Winter 2005/Spring 2006 Wise Traditions, and first wrote about vitamin A's ability to protect against vitamin D toxicity in my Fall 2006 article in the same journal, “From Seafood to Sunshine.” In a sidebar of that article, I suggested that “vitamin D produces toxicity by depleting the body of vitamin K” and that part of the mechanism by which vitamin A protects against vitamin D toxicity is by preventing the excessive production of vitamin K-dependent proteins, especially matrix Gla protein, also known as MGP:

It may be, then, that an extreme imbalance between vitamins A and D leads to the synthesis of abnormally high amounts of MGP. If there is enough vitamin K to activate all of the MGP, it will help protect the soft tissues from calcification. If, instead, the vitamin K cannot keep up with the level of MGP being produced and the pool of vitamin K becomes depleted, soft tissue calcification ensues.

I further elaborated on this theory in my Spring, 2007 article “On the Trail of the Elusive X Factor: Vitamin K2 Revealed,” published in Wise Traditions, and in my December, 2007 hypothesis paper “Vitamin D Toxicity Redefined: Vitamin K and the Molecular Mechanism,” published in the peer-reviewed journal Medical Hypotheses.

That summer, when my hypothesis paper had been accepted but not yet published, I sent it to Drs. Xiang-Dong Wang and Heather Mernitz at Tufts University, who had just published a very interesting study showing the ability of an activated vitamin A derivative to protect against kidney stones caused by activated vitamin D without antagonizing its ability to protect against lung cancer. At the time, it looked like I was going to get into the program at Tufts and they were excited about carrying out an investigation with me of the vitamin K-dependent protein expression in the tissues preserved from their experiment. Things didn't work out at some level higher than the lab, so I never wound up being part of the Tufts program.

In 2008, Dr. Wang's laboratory apparently followed through on the investigation and collaborated with the laboratory of Dr. Sarah Booth, head of the biochemical and molecular nutrition program there and renowned vitamin K expert, to confirm my hypothesis. The resulting paper was pulished in the December, 2008 issue of the prestigious Journal of Nutrition.

In the two figures below, different letters above the bars indicate that the measurements represented by the bars are statistically significantly different from one another. 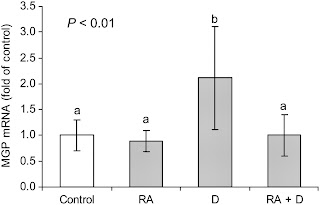 If the production of vitamin K-dependent proteins such as MGP exceeds the capacity of the vitamin K pool or the enzyme that uses vitamin K, the vitamin K carboxylase, to activate them, these proteins will be produced in a defective state. At best, they will not protect against soft tissue calcification, and at worst, they could perhaps actively faciliate soft tissue calcification. The active form of MGP is called “carboyxlated MGP,” while the defective form is called “undercarboxylated MGP.” 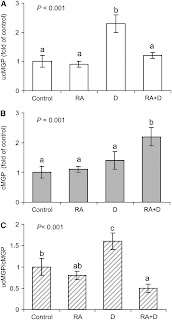 Overall, then, we see that both vitamins are needed for optimal health. Vitamin A alone did nothing to benefit the kidneys or the lungs. Vitamin D alone caused a remarkable reduction in the ability of carcinogens associated with cigarette smoke to induce lung cancer but itself caused kidney stones. When vitamin A was combined with vitamin D, lung cancer was improved just as much, and the kidney calcification was completely eliminated. Moreover, the activation of vitamin K-dependent proteins in the kidney was much stronger with both vitamins than with neither treatment, suggesting that the vitamin A not only “antagonizes” vitamin D toxicity in the kidney, but that the two vitamins synergistically improve kidney health.

The authors made another interesting observation that I had not hypothesized: vitamins A and D appear to increase the turnover of vitamin K and the conversion of vitamin K1 to vitamin K2. In the D group, liver stores of K1 were reduced and kidney levels of MK-4, the form of vitamin K2 that animals synthesize, were increased. All A groups, whether the A was given alone or in combination with D, had reductions in both K1 and MK-4 levels. The authors referred to this as “antagonism” between vitamins A and K, but since vitamin A improved vitamin K-dependent activation of MGP, could it not be that the reduction in K1 was due to conversion of K1 to MK-4 and that the reduction in MK-4 was due to increased utilization and turnover of MK-4? The authors never suggested that vitamin D “antagonizes” vitamin K1, for example, even though its levels were reduced.

I have pointed out elsewhere that even modest amounts of vitamin D, whether provided by UV-light or in the diet, decrease liver stores of vitamin A; when the doses of D are larger, they decrease plasma levels of A as well. This suggests that vitamin D increases the need for and turnover of vitamin A. The data in the Tufts study suggest that vitamins D and A both increase the turnover of vitamin K2, but that vitamin A has a special effect of curbing the huge increase in the need for vitamin K2 in the kidney. Thus, vitamin A both calms the waves rocking the boat of vitamin D toxicity while helping to steer the ship at the same time, navigating the passengers to safety.

Is the theory that the fat-soluble vitamins “antagonize” one another rather than cooperate with one other ready to die the death it has long deserved? There is a reason, of course, that traditional diets and lifestyles provided all three of them together — because they cooperate with one another to support life, growth, and radiant health.

Update December 17, 2016: If you enjoyed this, I encourage you to check out The Ultimate Vitamin K2 Resource. It has easy-to-read practical advice, click-to-expand technical explanations, infographics that explain the science in a fun way, supplement recommendations, and a searchable database of foods. This post as well as the resource are indexed with my other vitamin K-related writings at Start Here for Vitamin K2.